How to orgasm during sex

I remember typing in google, “How to orgasm during sex”. I was 19 and completely clueless.

I came across all sorts of advice: you need the right partner, you need to move your hips faster, you just fake it until you make it…

I tried it all. None of it worked.

I interrogated all my girlfriends about how to orgasm. Some of them were amused, others were really willing to support me, but in reality… most of them orgasmed only from oral sɘx.

At some point, I gave up and decided I would just keep waiting for the right guy.

That was what I believed: I need a good man who will take care of me.

I believed that I needed to behave a certain way and be attractive enough — all with the hope of attracting a man who would take care of me… and take away all my troubles.

That didn’t seem to work. If anything, the men I dated were bringing me more troubles. Certainly not orgasms.

Later, I ended up in a Tantra workshop. I approached the teacher, speaking in a frail voice: “I don’t have orgasms, what can I do?”

He looked at me, evaluating my body, and said: “You shouldn’t have any problem. You have a strong root chakra”.

A couple of months later I received my first internal sacred s.exual bodywork – yoni massage. I had so.much.pain. That must be what women experience when they give birth!

At one point, the practitioner told me: “You are having Amrita, that’s amazing!”

When I left, I felt high. I felt that my body didn’t end with my body. I felt expanded. It was uncomfortable but somehow beautiful too.

The next yoni massage I received was nowhere near as painful.
And the following one was pure pleasure.
A kind of pleasure I never thought was possible.
In. my. own. body.

During my upcoming in-person Liberation into Orgasm Retreat, both women and men will experience sacred s.exual bodywork (if they so choose). And if you want to dive deeper into this topic then you will want to stick around for Practitioners’ training, that happens right after!

✨To join us for Liberation into Orgasm, click here. 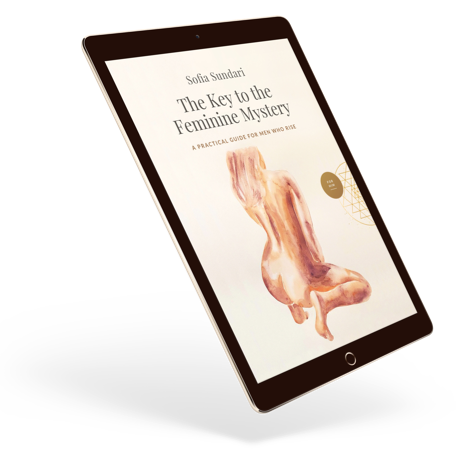 The Key to the Feminine Mystery

A Practical Guide for Men who Rise